Adel Agayby Zakhary, 50, worked as an accountant for Carr Futures in the north tower of the World Trade Center. 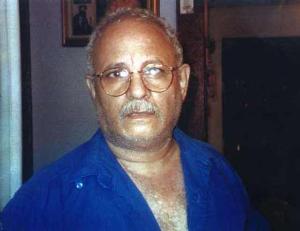 Zakhary was born into a Christian family in Cairo, Egypt and emigrated to the United States in the mid-1980s with his wife, Nagat, and son,George, to escape violence against Coptic Christians.

In North Arlington, N.J., the Zakharys centered their lives on St. Mark's and St. Anthony's Church. Mr. Zakhary studied the Bible, the lives of the saints and books by Bishop David, a friend and church leader.

At home, Zakhary was a true patriarch. He cooked and cleaned, and he transported his children to and fro.

Adel Zakhary would always have dinner ready for his two children,son George and daughter Mariam, when they got home. "He loved to cook," said  George."Cheesecake with strawberries," and "Chicken cordon bleu."  His cheesecake-it's a bit of a family legend. Nephews refuse to eat any other New York-style cheesecake-to this day-after having Zakhary's. Others just don't compare, family members say.

The elder Zakhary,  was able to take care of dinner because for nearly 15 years, he worked nights at the World Trade Center as an accountant for Dean Whitter. He worked night shifts so he could spend more time with his family. His children wondered when he ever found time to sleep. He was a bit of a superman in that sense-he did it all and never tired.

About four months before Sept.11,2001, Adel's schedule changed to daytime hours when he became an employee of Carr Futures following mergers. He was not terribly happy about the change.
Mr. Zakhary had a sharp side. "He was sarcastic to the point you couldn't tell if he was serious," George said.

But his sister-in-law remembers,"He was always laughing and smiling,"

I found it so terribly sad, that Mr. Zakhary had left his homeland to escape violence, and it seems that the violence still found him ,17 years after he came to the USA.

My thoughts and prayers are with his family and friends who are missing him today, and every day, and I feel blessed to have had the privilege of learning a bit about him in preparing this tribute.

May We Never Forget.

Thank you for this. I, too, took part in project 2,996 again this year. We need to remember the individual lives.